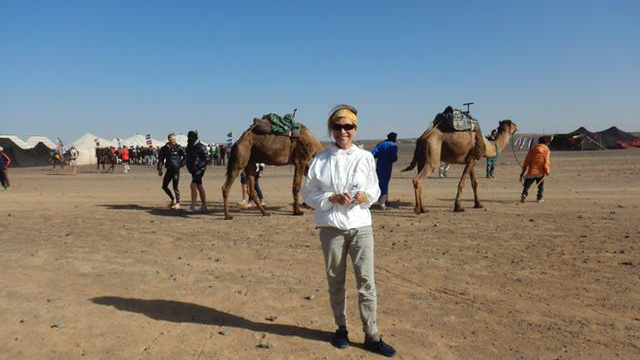 “Forget all the reasons why this has the potential to fail,

and focus on the one reason why you could succeed.”

Picture running a marathon. Now picture running a marathon in 38 degrees. Multiply this by 6, and voila, you have the infamous Marathon des Sables, a trail ultramarathon divided into 6 stages in the heart of the Moroccan desert. Oh and it’s self-supported, meaning you’re responsible for carrying all your food, water and gear to survive 6 days. Sand dunes, breathtaking inclines, climbing rock facades; you name it, the MdS has it!

“Forget all the reasons why this has the potential to fail, and focus on the one reason why you could succeed.”

This is the mantra that runs through Carole Contant’s mind as the 62 year old from Montreal nervously toes the line of the Marathon des Sables. consumed by apprehension and doubt. As she glances around her, she sees nothing but younger athletes, all proudly discussing their previous athletic accomplishments, each more impressive than his neighbour. Last year, she was one of the just 9 women in the 60-65 age category out of a grand total of 183 women and 1108 men.

A little under two years previously, Carole decided that she needed a drastic change of lifestyle to get back into shape. After a long period of abstinence from sports as a result of a ski accident aged 39 that left her with a ruined knee and countless surgeries, Carole was in no way the perfect candidate for running. But with a little patience and great determination, she re-discovered her passion for moving. At first just following a strength program with a coach, and a year later, spurred by her newfound drive, she decided to take on a challenge so immense it terrified her; she would run the Marathon des Sables – on a whim!

Carole recalls with humour the song that was played at the start line; the iconic “Highway to Hell”, a tantalising nod to the diabolical course that lay ahead. The Marathon des Sables stretches over 257km of burning desert that competitors cover over 6 days, including a 84km stage. In one go. Carole remembers those terrifying moments preceding the race, corralled in with 18 other Canadians, huddled around the only form of life for miles in the unending expanse of the Sahara. 18 athletes with plenty of adventure racing experience, bulging muscles and high-tech clothing that spoke for themselves. It was in these moments that she wondered if she really belonged there at all. And she wasn’t the only one to question her decision; her choice to take part in the MdS resulted in the divided opinion of her close community. During the compulsory medical exams required by the race, Carole faced the incredulity and disapproval of her health care professionals, despite her medical work up being cleared. “But Ma’am,” they said, “indulging in such an effort at age 62 without an athletic background would be foolish.” Regardless, with a flawless EKG under her belt, Carole was ready for the life changing experience that would be the Marathon des Sables.

With just 12 short months to get ready for the race, Carole was facing the massive undertaking that would be training for such an event; build a solid base of endurance, learning about nutrition and hydration, and most importantly, manage to train in simulated race conditions, in the depths of Canadian winter. With the assistance of her coach Elizabeth Vizi, Carole increased weight training sessions, started yoga classes and began training with a running club. To recreate race conditions, she spent a month in Costa Rica, and to the amusement of the locals, ran daily laps along the beach fully dressed in long pants, sleeves and a backpack full of weights.

The only fatigue she encountered during the race, was mental. During the last leg, runners had to cover an endless 18km stretch in a straight line, during which they could see the finish in the distance, a tormenting mind play that tested her resilience. In a serious caloric deficit and exhausted, Carole struggled to finish. But in spite of this difficult episode, Carole was unwavering in her determination. She says “Every time I thought something was too hard to overcome, I told myself: suck it up, it’s doable. I never let myself believe that anything was too hard for me.”

Another driving factor for Carole was the presence of her fellow runners; for a large section of the race, she ran with a blind runner and his guide. For another, she kept company to a double amputee. She met a fellow competitor aged 69, tackling his 28th MdS. In her moments of doubt, when the fatigue, the heat and the race itself seemed insurmountable, Carole found her strength in the beautiful camaraderie around her, in the pride of making it in spite of the odds stacked against her, in the kindness and generosity of the race volunteers.

It was with much emotion, humbled and raw at the height of her 62 years of age, that Carole proudly finished a race that many great ultra runners fear to start, a race described as one of the world’s toughest. She says “age doesn’t count. Fitness does. In some moments, I did wonder if I was too old. But I felt good. I felt fit. I never felt like my age would actually interfere with my ability to run this race.” And the truth is that since the race, Carole has found a certain serenity in her life that wasn’t there before. The pleasant joy of being alive and the pride that she’ll carry with her forever and that will buoy her through her future challenges.

This woman, who one could easily underestimate, with her groomed appearance, elegant and delicately mannered, exults an unparalleled strength of character and a mesmerising wisdom. She’s inspiring, Carole – a precious reminder that no matter how massive a challenge may seem, we women are capable of far far more than we could ever imagine.