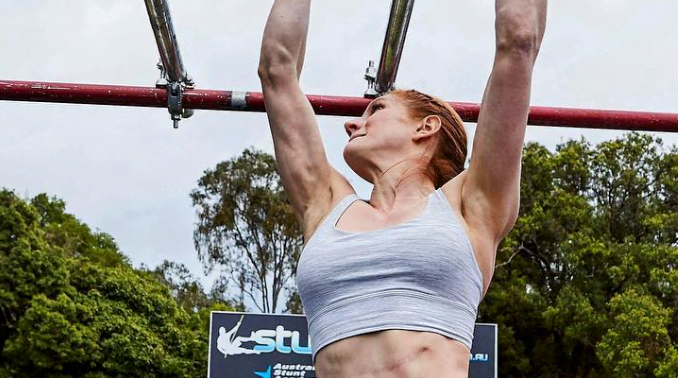 If you’re a fan of Australian Ninja Warrior, you probably know Olivia Vivian as the bubbly redhead who did the splits up the Warped Wall. But there’s much more to this Olympic gymnast than meets the eye. Here, the 30-year-old Perth local chats about her love of high walls, hospitality, and heels.

Born with a diaphragmatic hernia – meaning her abdominal organs were crushing her lungs – Olivia was told she’d probably never be any good at sport. And she mightn’t have ever become a gymnast if she wasn’t pushed to join a friend for a gymnastics class as a child. One hour in, she was hooked. Olivia says, ‘I just had a passion for it. I loved it, so it didn’t feel like learning – it felt like playing.’ She went from strength to strength and, in 2008, competed at the Beijing Olympics.

Training for the Olympics wasn’t easy. By her mid-teens, gymnastics had become both mentally and physically demanding. Olivia explains, ‘In the lead up to Bejing, I was training for the goal – I wasn’t training because I loved it anymore.’ Constantly exposed to criticism, she’d learnt that ‘at an elite level, you’re going to having people that are equally as strong. They’re physically the same, what separates them is their mental strength and ability to block out thoughts.’ Because she loved the sport, she persevered for years, going on to compete at the 2014 Commonwealth Games. Eventually, it all took its toll; she was burnt out, didn’t want to exercise, and was ready to put gymnastics behind her.

That all changed in 2016, when Olivia was approached about doing Australian Ninja Warrior. She didn’t know anything about Ninja – just that it meant a free trip to Sydney. But the course, ‘a super-sized playground’, offered her the perfect challenge, being as fun as it was gruelling. Initially, she had little idea what she was doing, but she was determined to conquer the Warped Wall. She’s now appeared on all three seasons of Australian Ninja Warrior, becoming the first female ever to make it to the grand final. She says, ‘It was unexpected, but saying yes to opportunity completely changed my life.’ Not only has she found a great community, she’s living proof that if you stop making excuses, try new things, and let go of expectations, you’ll surprise yourself.

Olivia is full of surprises. You might think that someone who spends so much time training would feel most at home in gym gear but Olivia says, ‘I have an obsession with high heels. I’m more comfortable in high heels than I am in sneakers. I have to stay away from shoe stores. It’s a problem – I have a closet full of shoes!’

Then there’s her career outside of sport. She studied Media and Communication, and Exercise and Sport Science, but fell in love with hospitality, a field she continues to work in since ‘swinging around on monkey bars doesn’t pay the bills!’ Olivia says of hospitality, ‘I love that human interaction and I love the opportunity to make someone’s day, especially grumpy people – they’re my favourite. It’s my mission to make them smile.’

These days, Olivia balances managing an Italian restaurant with motivational speaking, running workshops, and her own training. She’s created Ninja Blueprint with her partner and fellow Ninja, Ben Polson, which provides invaluable information about becoming the ultimate athlete. She plans to grace our screens again for Season 4 of Australian Ninja Warrior where we’re hoping she’ll make it all the way to the end!