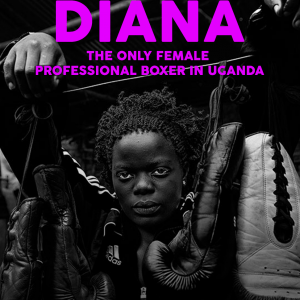 HOW ONE OLYMPIC HOPEFUL IS CHANGING THE WORLD OF BOXING

This year’s Gutsy Girls Adventure Film Tour is full of laughs, inspiration and women adventuring all over the world. The film Diana was a truly exceptional addition to this years program. The strength of her character absolutely shines through in this short film and you can’t help but feel honoured to know her story. At only 5 minutes long, this film leaves a lasting impression.  But it is a film that only got made due to happenstance.  The Australian based team behind the film were in Uganda on a paid project, before their official job started they stumbled upon Diana training in the gym.  Captivated by her skill they introduced themselves and asked if they could film her.  Their meeting lasted just a couple of hours.  In that time the crew captured all the footage you see in the film.  After this encounter they got on with their paid job.  Back in Australia and the job completed they then crafted the film Diana.

Diana lives in Katanga slum, Kampala the largest, and arguably most dangerous, slum in Uganda. She trains at the Rhino Boxing Club and has been boxing for 10 years. Training 6 hours a day for 6 days a week, she is a formidable opponent when she steps into the ring. Her love and passion for the sport, sees her mentoring and teaching other girls in the slum how to box and ultimately, how to defend themselves.

In the film, Diana tells us that “at the moment, I am the only female professional boxer in Uganda” which is a reminder that the fight for gender equality in sport is far from over. In Uganda it’s only just beginning.

Diana began boxing as a way to learn to defend herself from bullies. She experienced bullying in school and as she observed that girls in the slum don’t know how to protect themselves, she wanted to change that.

The Head Trainer at Rhino Boxing Club, Kapalata Innocent, has been there for 17 years and his dream still remains – to bring up a champion boxer from a ghetto area. He currently trains members of the Ugandan National Team but his dream has now extended to not only the just his male competitors, but his female competitors also. To have a medal in their slum, from the Olympics or the World Championships would be a true dream come true for everyone at the Rhino Boxing Club.

Having now qualified twice (!!) for the Olympics, 2012 and 2016, she was so close to achieving the shared goal that she and the Rhino Boxing Club have – to be an Olympic medallist. However, in Uganda, women are not recognised within the sport of boxing and so even though she qualified to compete, she received no support and was unable to proceed to event. Uganda doesn’t allow women on their Olympic boxing team. Devastating news for Diana, who works and trains so hard for her sport.

A set back like this might deter some athletes from trying again and they may even abandon their dreams altogether. But not Diana. With strength, determination and grit she continues to live out her dreams continuing to compete in East Africa in the hopes to change her governments position on female boxers.

Alongside her own training and competing, she has started a competitive boxing tournament for girls in the Katanga slum. Her passion is to see the next generation of Ugandan women be given the opportunity to represent at the Olympics.  You’ll be pleased to know that the entire screening fee the Gutsy Girls Adventure Film Tour paid to share Diana has been donated to Diana and the gym she trains in.  If you would like to support Diana directly you can donate below and every cent you donate goes directly to Diana.

The film is available as part of the “Best of Gutsy Girls Adventure Film Tour Volume 1” on Adventure Reels TV, click here to watch it now.