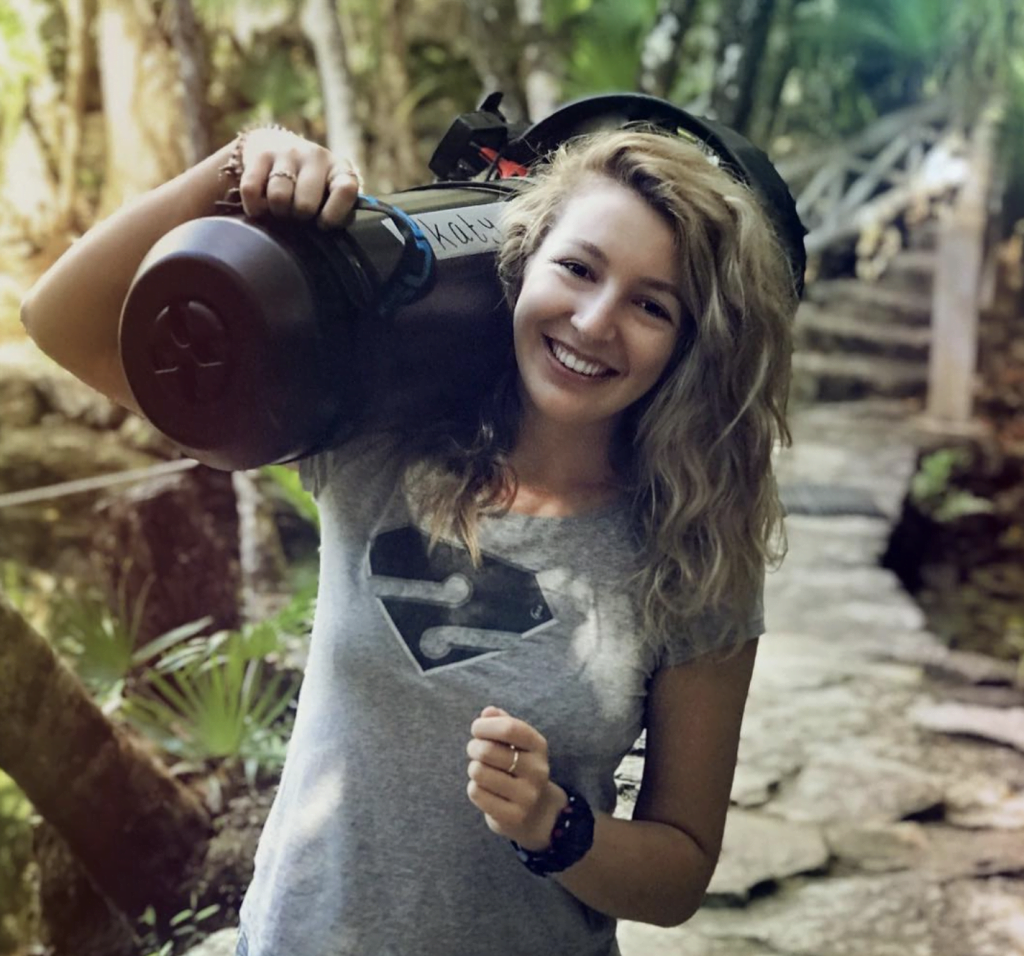 TECH DIVING TO FIND “A PEACE WITHIN”

What do cave diving, landscape painting, and ancient Mayan culture have in common? They all feature in British technical diver and filmmaker Katy Fraser’s documentary, A Peace Within, currently debuting across Australia in the Ocean Film Festival. Get ready to plunge into an underwater fantasy land as you witness extreme artist, Philip Gray, paint his way through Mexican caves.

A Peace Within came about when Philip approached Katy in 2016. The Irish artist has painted in many extreme locations, from Antarctica to Everest. He was keen to have Katy film him painting while underwater in Mexican cenotes – the stunning sinkholes that form when limestone gives way to reveal ground water. They travelled to Mexico with an amazing crew and filmed 4 wildly different cenotes over 5 days – The Pit Cenote, Cenote Calavera, Casa Cenote and Cenote Car Wash (so named because taxi drivers used to wash their cars there). Each cenote brought its own challenges and magic. Cenote Car Wash, for example, is framed by iconic trees and beautiful lily pads, while Cenote Calavera has a halocline at 15 metres (where salt and fresh water meet), which creates an exquisite “river within a river” effect. It was her first documentary and Katy rose to the occasion – “I was the camera operator, I was the producer and I did all the post-production. It was a huge responsibility”.

There was also a huge responsibility to protect the environment and crew during filming and this was handled by safety divers Jaime de la Puerta Salazar, Alexander Coffield and Tamara May. Katy’s own approach has always been “to become proficient in my environment first and then take a camera in”. In other words: diving first, film second. For this documentary, Philip painted in the caverns (where you can still see light) as he was not a trained cave diver.  Safety is always a concern when diving and the film setup added further challenges: getting Philip’s easel into position, weighting equipment, setting up lighting, and protecting the environment with tarpaulin. There’s a delicate ecosystem full of plants and interesting critters, from bats high above to blind cave fish deep below. It’s up to humans not to destroy that.

Treating the environment with care was particularly important given how sacred cenotes are in Mayan culture. In addition to Philip’s artistic journey, the documentary captures a ceremony conducted by a shaman and delves into the cultural significance of caves. Cenotes are so awe-inspiring that they are believed to be the entrance to the underworld, with the roots into them transporting gods from one world to another. Katy has beautifully woven together the caves’ environmental, aesthetic, and spiritual elements into her own piece of art within the space of 25 minutes.

From humble beginnings filming divers for a pittance in Thailand, Katy’s career has exploded.  “Diving and art have always been the 2 big passions in my life” – diving because “it’s quiet, peaceful and relaxing”, art because she’s free to be herself creatively. She’s carved out a niche by jumping on opportunities and collaborating internationally. For example, US duo Baseline Drift, who she shoots music videos for, created the soundtrack for A Peace Within. She’s gone from strength to strength and is set to take on a new challenge this April when she moves to Bristol to work with the company that produced Netflix’s Our Planet and The Hunt. And at this rate, it won’t be long before she’s working with Attenborough.

View the trailer for A Peace Within here: https://youtu.be/ZEUcbVb50iE